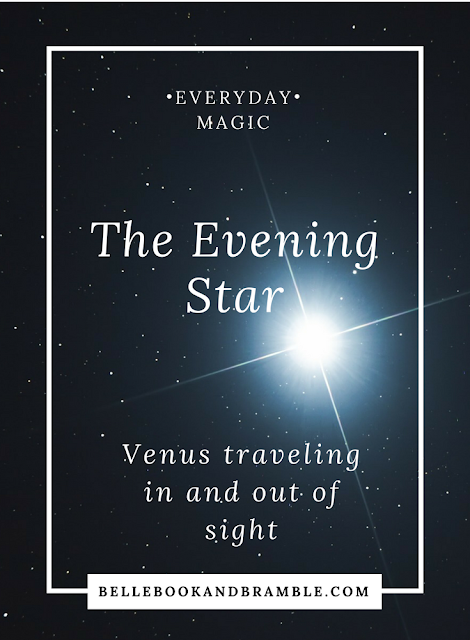 The cloud cover thwarted my view of the lunar eclipse over the weekend, and light pollution prevents me from getting a good look at Comet 45P, which approached closest to the earth on Saturday.

Venus was burning bright on the western horizon, brighter than I’ve ever seen her before, with a pure, white light. I spotted Mars, much fainter, to the south of Venus. At first, I wasn’t certain that Comet 45P wasn’t putting on a show. But looking it up online…it is, indeed, Venus.

Venus is the Roman goddess of love and beauty. Maybe it’s appropriate that she’s showing up on the eve of Valentine’s Day?  Like Aphrodite, she was born from sea-foam, springing forth from the ocean as a fully-formed goddess. She’s always been associated with the element of water, with the universe of feelings that swim the undercurrent of that domain. She’s also associated with Ishtar, with making astrological journeys out of sight, into the underworld, and emerging again on the horizon, victorious.

I stood for a little while out in my garden and soaked in some the starlight. Sometimes, when all is quiet in suburbia for a moment and the sky is glorious overhead, the signs in the sky feel like a blessing.  And a reminder that there are all kinds of sparkly movements going on overhead, out of sight, above, that cannot be seen from below.
Posted by Belle at 9:16 PM

Email ThisBlogThis!Share to TwitterShare to FacebookShare to Pinterest
Labels: Stargazing